What to expect on your Religious tours

Our Religious vacations offer a unique way to connect with your spirituality, reshape your religious perspectives, and leave you with a renewed sense of faith. You’ll return home refreshed, renewed, and ready for another guided faith vacation. Whatever one’s religious persuasion, it’s hard not to be moved by Jordan’s religious heritage. This is the site, archaeologists assure us, where John the Baptist preached, where Jesus was baptized, where the first five apostles met, and where, thereby, the foundations of the early Christian faith were laid. Jordan is home to many historical religious sites and some of the world’s earliest known churches, including Bethany Beyond the Jordan, Mount Nebo; a small church overlooking the Dead Sea, Umm Qais overlooking the Sea of Galilee; Petra, which is mentioned in the Bible’s Old Testament several times, and is today an Islamic tomb and many more sites! On our tours, we also recommend you visit Jerusalem, Bethlehem, and many more with us. We also offer tours dedicated to people interested in Islam or Muslims. In Jordan, you can find many holy shrines and tombs of prophets and the companions of Prophet Mohammed. In the history of Islam, the territory played a special role. Three important military campaigns against the Byzantine army took place here; the battles of Mutah, Yarmouk, and Fahl. This tour offers you the chance to visit the most important tombs and historical sites.

Most highlighted Religious sites to visit Most highlighted Sites to visit

Baptism in Bethany At Jordan River Spend a Day with Shepherd Experience Meal with local family in Petra 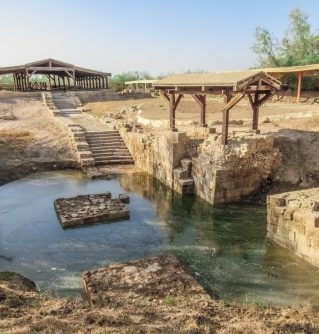 Arbood is the primary food a Bedouin would have for lunch while shepherding the goats in the wilderness. A local will teach you how to bake Bedouin bread from only flour, salt and water kneaded and baked in ash.

You will have the chance to bake your own fresh and tasty local Arabic bread using specialized equipment. Dozen of fun is included!

Join one of our chefs and learn to make a full three-course vegetarian lunch of popular Jordanian dishes. At the end of our cooking class enjoy a feast of your own creation. The recipes for all the dishes will be emailed to you.

Learn more about how to cook some local favorites such as mansaf, mezze salads, fatoush, and tabbouleh, and main dishes like musakhan chicken with sumac and onions. Start with making a refreshing lemon- mint drink that is popular in Jordan and after lunch you can learn some Arabic calligraphy. ​

Become a dot artist! This type of decorative art entered the Arab culture recently and is similar to stippling or pointillism. Colorful patterns or images are created by placing small dots or points of color together, rather than using solid lines or brush strokes. This technique can be used to decorate books, stones, or home furniture

Help animals on your vacation! The Aqaba dog shelter needs the help of volunteers to clean the local dogs’ caves in the mountains. RSNAP is a nonprofit organization, established for the sole purpose of generating compassionate and conscientious conduct towards nature and animals and improving the local community’s relationship with its surrounding environment.

On foot tour of the Harmony Trail that combines the lifestyle between Muslims and Christians till now. Visit of Al Ein Plaza, Abu Jaber Museum, English Evangelical Hospital Complex, and many other significant landmarks of the city. Enjoy a home-cooked meal, lunch served by a local family. End the tour at Al – Maidan Street to walk Al – Hammam Street Shops for free shopping time if interested. ​

Al-Gherbal Restaurant was founded in 2017, offering a high standard of authentic food experience in As-Salt. It is located in a heritage building that dates back to 1824 which was an Ottoman army house. The place is full of heritage pieces that take us hundreds of years back. It’s very characteristic in terms of design and showcases the five main areas of As-Salt through its visuals and custom-made furniture. This visit is being considered as around to an archaeological museum accompanied by a rich menu that serves various traditional Salti and Jordanian dishes.

The place can offer you many cultural activities such as trying the traditional costumes of Salti people, Henna drawing experience, playing the old game “Mancala”, and many more.

Spend a Day with Shepherd Experience

Spend a full day with a local shepherd grazing the family’s goats in the wilderness of Feynan! During this authentic experience, share a lunch of Arbood bread and sweet tea with the shepherd. This adventure will give you a rare insight into the lifestyle of the Bedouin community and their daily occupations!

Iraq al-Amir is home to many caves that date back to the copper age and can be explored. It is also nearby to the site of Quasar Al Abet, which is the only ancient Greek site that survives in Jordan today. ​

Nestled in a small cozy house restored into a beautiful restaurant, Hikayet Sitti is a place to discover firsthand the Jordanian culture and history and its generous culinary traditions. In the midst of the Christian city of Madaba, the local women put their hands and knowledge together to prepare and serve you the most delicious meal one could ever hope for. This peaceful retreat is the perfect place to gather with friends or family to enjoy real Jordanian hospitality, as good and hearty food will inevitably be accompanied by warm welcomes and homely smiles. A meal in this restaurant will remain for a long time a soothing and memorable experience of your travel to Jordan.

You haven’t tried falafel until you’ve eaten here. This legendary eatery, run for half a century by a Turkish family, is so popular with locals and visitors alike that there’s stiff competition for tables, many of which overflow into the alleyway. Aim for an early lunch or supper if you want to avoid the queues, although it has to be said that Hashem does a fantastic job of feeding the multitude in record time. Mid-afternoon, it makes a great place to sup a mint tea and watches downtown slide towards siesta.

Become a local cook! Sayadia and Bokhari are two of the most famous local food dishes in Aqaba and are made up of many different spices. The people of Aqaba typically make these dishes on official occasions and events.

Meal with local family in Petra

What better way to have a true local experience than eating in Petra at a local home, sitting down and enjoying Jordanian food with the family. Receiving guests bring great honor in the Jordanian culture and you will experience the genuine warmth and welcome that your host bestows on you. ​

Visit the House of Calligraphy in Rasun village. It offers tourists and locals alike the chance to have their names and favorite phrases written in fine Arabic script on leather, clothes or silk, as well as to interact with local workers in the area. ​

The Baptism site formed part of the early Christian pilgrimage route between Jerusalem, the Jordan River, and Mount Nebo. The area is also associated with the biblical account of how the Prophet Elijah (Mar Elias in Arabic) ascended to heaven in a whirlwind on a chariot of fire. For those following in the footsteps of Jesus, you can now get baptized at the official Jesus baptism site, Qasr al-Yahud, on the Jordan River. ​

The King Abdullah I Mosque was built between 1982 and 1989. It’s capped by a magnificent blue mosaic dome beneath which 3,000 Muslims may offer prayer. You will learn the prayer rituals, daily prayer schedule and the format of the Quran, what will help you understand the practice of Islam. ​

This historic castle was built atop Mt ‘Auf (1250m) between 1184 and 1188 by one of Saladin’s generals, ‘Izz ad Din Usama bin Munqidh.The castle commands views of the Jordan Valley and three wadis leading into it(Wadi Kufranjah, Wadi Rajeb and Wadi al -Yabis) making it an important strategic link in the defensive chain against the Crusaders and a counterpoint to the Crusader Belvoir Fort on the Sea of Galilee. Another major objective of the fortress was to protect the development and control of the iron mines of Ajlun.

Go to all Religious tours

Just tell us where you want to go, including your choice of activities, experiences, accommodations, and dining options and our expert will craft your perfect experience! We’ll create your dream vacation no matter how unique it is.
Tailor-Made your Religious holiday Experience Jordan’s food
Our Religious vacations offer a unique way to connect with your spirituality, reshape your religious perspectives, and leave you w...
Read more Jordan Things to Know #1: Why Jordan should be your first pick in traveling to the Middle East
Our Religious vacations offer a unique way to connect with your spirituality, reshape your religious perspectives, and leave you w...
Read more Travelers Guide to Ramadan in Jordan
Our Religious vacations offer a unique way to connect with your spirituality, reshape your religious perspectives, and leave you w...
Read more 52Elli
Verified review
windy/cold our driver was great. He helped us to get the tickets, was at the meeting place on time at the ship and return. Would recommend him again and again.

Dianadub
Verified review
Visit a fantastic country with fabulous Zaman tours Highly recommend booking your trip with Zamen tours. We booked a 7 day trip and from the moment we touch down in Jordan our expectations were exceeded. Customer service is really important to them. Jordan is a fabulous safe country that has something for ever one. From Its historic sites, adventure and leisure. Will most definitely be back to Jordan and booking Zaman tours again. This was our itinerary - Jerash Amman city tour - Madaba - Mt. Nebo - Shobak - Petra - Little Petra - Wadi Rum Camp, Wadi Rum Jeep Ride, Dead Sea.